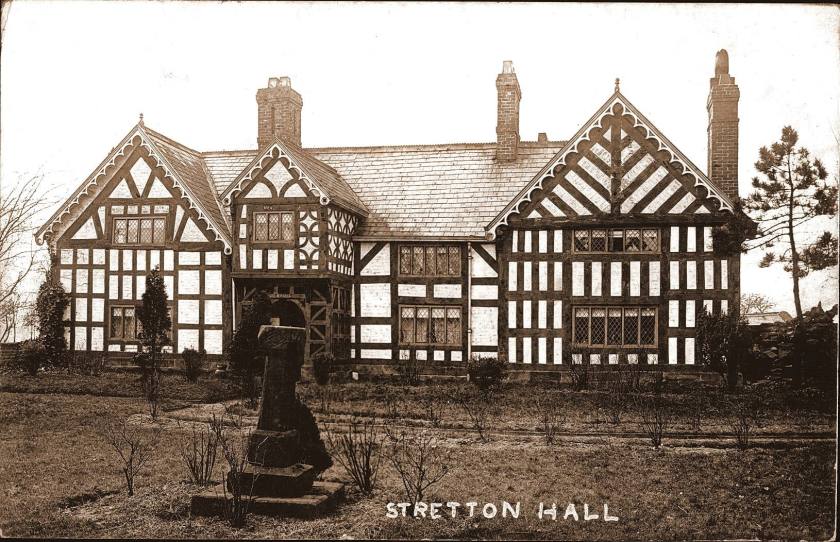 If you’ve been watching Gardeners’ World  – good choice by this way – this is the other Stretton Old Hall, near Warrington.  Here’s the i-player clip of the garden at Stretton Old Hall in Tilston from 2018 by way of compensation:  https://www.bbc.co.uk/programmes/p06l8mml

The Stretton Hall in Lower Stretton is situated in Hall Lane. It was built in 1664; restored and extended in the 19th century. It was seat of Starkey family and is believed to have been constructed with the material from the demolished, moated Manor House, known as the Nether or Lower Hall. It is now classed as Grade II listed.

There has been a lot written about the Starkey family, and much of it contradictory. However, it is clear to see that the quote “so that this ancient family is now languishing” has some truth in it.

In the early years of the 19th century, the Starkey family of Upper or Over Hall had died out. The Thomas Starkey who was lord of the manor in 1650 was succeeded by his eldest son Thomas, who died without issue. The next son, Philip succeeded to the manor and estates, of which a large part had been lost in the Civil War. Philip died in 1714 and was succeeded by his sister, Christian, the wife of Peter Starkey of Warrington and by Joseph Coppock his nephew. The latter was the son of Frances Starkey. The Lower Hall was sold in 1719 to Henry Wright of Mobberley.

Christian Starkey passed her share to the Ann, the widow of her brother-in-law Thomas Starkey, who passed it on to Thomas son and heir of Joseph Coppock. On the death of Joseph Coppock his son Thomas became sole heir. Thomas by his will of 1749 arranged for the estate to be divided and sold.

From papers owned locally we can establish the following:

In 1739 (when he was still alive), Thomas Coppock sold the estate by mortgage to John Foxley of Over Whitley. By 1743 John Foxley couldn’t keep up with the mortgage arrangements so he handed it to Richard Rutter of Moore.

In 1749 Thomas Coppock died and his April his will was proven giving all his real estate in the City of Nottingham and in the towns of Stretton and Appleton, Cheshire, to his executors, on trust to sell the same for the best price, and to invest one fifth of the money raised for the use of his wife, Blandina, for life. Unfortunately, two of his executors did not continue, leaving William Spencer as the only acting executor.

By 1753 a Robert Okell from Aston by Sutton had purchased the Stretton Hall estate.  Six years later one of Robert Okell’s sons was marrying Mary Eaton and part of the marriage was a dowry paid by her father, Robert Eaton, of £500. A four part agreement was made between Robert Okell, Robert Eaton & Mary Eaton, John Eaton and Samuel Okell & Thomas Eaton (the last being sons of the first two).

From the Land Tax returns, John Bradshaw was the owner of Stretton Hall from before 1780 until 1805 through marriage, and then sold to William Dutton bought the estate. The tenant farmer was Edward Wright, with his son Peter Wright taking over in 1804 following his father’ death and at the time of the new ownership. Peter Wright remained at Stretton Hall until 1815 when Joseph Morrey took over.

According to the 1841 census Stretton Hall was occupied by  Joseph Morrey a 70 year old farmer with his family, including wife Mary and sons William and John.  The tithes map of 1846 records the hall as owned by Lionel Courtier Dutton and occupied by Joseph Morrey, farmer and Peter Lawson an agricultural labourer. In 1850, it was described as being a “curious old structure of wood and plaster with projecting gables”. By 1851 Joseph’s son William Morrey was farming at Stretton Hall, and remained there past 1861. In 1851 Peter Lawson was still living as an agricultural labourer  with his family, but by 1861 he had moved to Whitley and was living with his daughter Elizabeth and her family.

In 1864 Joseph Smith and family had moved in to Stretton Hall from Stretton House just down the road. Joseph Smith was born in Antrobus in 1822 to James and Mary Smith who were agricultural labourers. Joseph Smith was educated for a short time at Whitehead’s in Antrobus. Disabled by a stiff leg, he started to make his fortune selling sods off Whitley Reed to farmers to cover their potatoes. He progressed into potatoes farming, then moving to Stretton House.  During this time he developed a portable threshing machine, moving to Stretton Hall Farm when it fell vacant. In 1871 he had sufficient funds to purchase his own land and in 1872 bought Tan Yard Farm off James Whitlow of Garland Hall, Crowley. He tenanted this out whilst remaining at the Hall.

In August 1884 Henry Neild of Whitley bought Stretton Hall, the outbuildings and 86 acres of land from Mr. Robert Pierpoint for Joseph Smith the current occupier for £8,800. The auction particulars described it as an “excellent country residence for a gentleman however good his position.” Lot 2, consisting of 15 acres was bought by Joseph Smith the sitting tenant for £1,500.

By the time of the 1891 census Joseph Smith was aged 68 and living at the Hall with his 70 year old wife and family. In addition there were a number of agricultural labourers, seven of whom were Irish.

Joseph Smith died on 19 February 1896 and was widely mourned. According to an article published at the time ‘the deceased served as guardian for seven years, and he had been assistant overseer for Stretton and parish constable, and was vice-chairman of the Stretton Parish Council. endowed with a genial manner and good judgement, he was often called in to settle an disputes and arrange valuations for farm produce and improvements.’

In 1901, Stretton Hall was owned by Mrs Smith, widow of Joseph. She farmed and potatoes were taken in hampers down to London Bridge in Stockton Heath for loading onto the boats for the Manchester Potato Market. Mrs Smith sent cheeses off to the Chester Cheese Fair, sixty at a time. See Memories of Stretton for a personal memory of the Hall by May Bower.

In December 1901 Mary Smith died and on the 9 January 1902 the farm contents was put up for auction by their son, Arthur Smith. By the time of the 1911 census William Faulkner, son of Alfred Faulkner of Moss Hall lived at the hall with his two unmarried sisters.

From prior to 1939 until after 1945 Joseph’s grandson Frank Ellis Smith was living at the hall along with his wife and widowed mother in law. He was the son of Arthur Smith and married his cousin Beatrice Sankey, daughter of Jacob and Frances Ann Sankey from Moss Wood Hall.

Stretton Hall House was sold to the brewery Greenalls in 1950. Until the mid-60s, the Hall was occupied by John, William and Ethel Hughes. John Hughes was the head brewer at Greenalls. Then followed Mr and Mrs Leslie Cussons of the soap making family who were still living  there in 1974 and James (Jim) Jenkins.